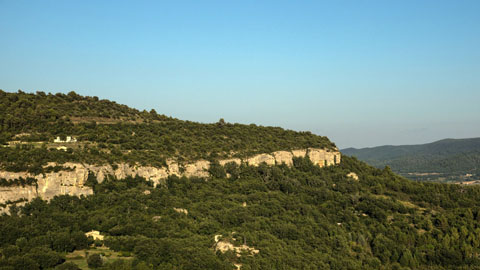 St-Martin-de-Castillon is built on an overhang, on the edge of a rocky plateau overlooking the Calavon Valley. It offers a magnificent panoramic viewpoint over the Luberon. To the east, the view encompasses another plateau, that of the Courennes, whose name refers to the crown of limestone rock surrounding it. Made up of molasse rock, these vast plateaus lead to steep cliffs under which the first inhabitants took refuge in caves and shelters. Later on, they chose these sites as the location of their perched villages. Press on "Play" to find out more.